Where you live in the United States matters when it comes to taxes. While the federal tax rates are unchanged, state and local taxes play a big role. There are plenty of taxes to consider. Sales tax, income tax, real estate tax, and more. With that in mind, here are the cities with the lowest taxes. 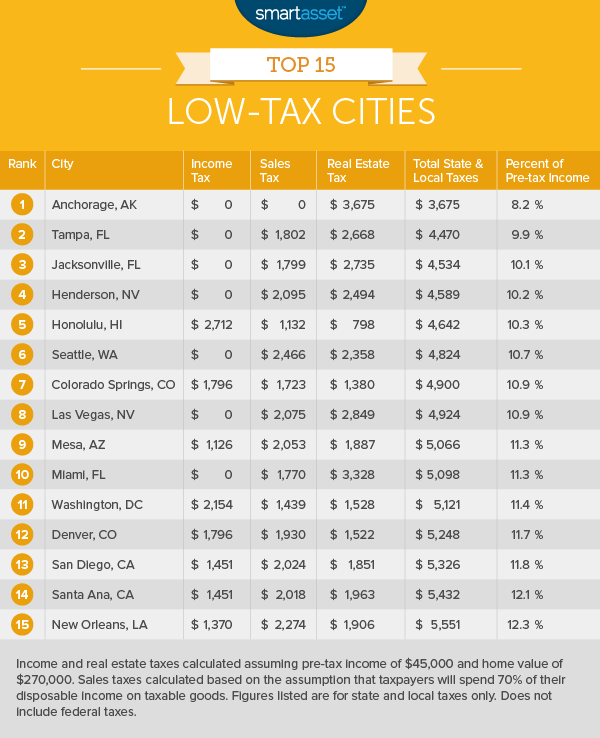 Of course, taxes vary.  For example, you might think that Washington, DC would be a high-tax state. In many ways, it is. The cost of living in Washington, DC is extremely high after all.  About the same as San Francisco.

But that doesn’t mean that taxes are the only driving factor. Far from it.

In the case of Washington, DC, a lot of the cost of living is due to the cost of housing. Its top marginal income tax rate of 8.95% is  one of the highest in the country. However, that rate only applies to income earned over $40,000. This means that middle and lower-class residents pay a far lower rate.

Taxes are an important thing to consider when deciding where to move or live. However, they aren’t the only thing. The cost of housing, state and local taxes, cost of transportation, and more are all important.

Thankfully, City vs City accounts for all these. Using data curated at the zip code level, City vs City determines the true cost of living in your city. You can also compare your costs with another city and see which one comes out ahead.

If you’re thinking of moving, don’t make a move without downloading City vs City first.