The cost of living in your area has a profound impact on how far your minimum wage salary will take you. So, where can you live on minimum wage? If you’re a minimum wage worker, try these cities.

Where Can You Live On Minimum Wage Anyway?

The federal minimum wage is currently $7.25 / hour. As workers around the country fight to raise the minimum, many employees still make at, or near that wage. If you’re one of them, here are the cities where minimum wage goes the farthest. 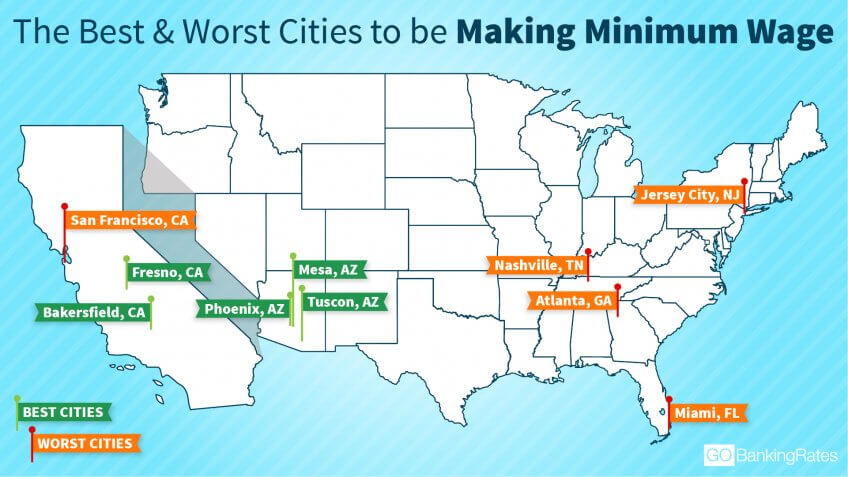 It should be noted that some of these states, such as California, have a state mandated minimum wage that is higher than the federal minimum. In fact, most states in the US have set their own minimum wages higher. California, for example, is set at $11 per hour.

If you’re surprised to see any California city on this list, keep in mind that the San Francisco is ranked as the WORST city to be a minimum wage earner in. The larger cities in California have a substantially higher cost of living. Whereas Bakersfield is relatively rural by comparison.

Far removed from the high cost of living in the more concentrated urban areas, smaller towns and relatively small cities can offer a great situation. So if you’re wondering  just where can you live on minimum wage; there’s options.

As always, location matters. Minimum wage laws vary around the country. As do housing costs, taxes, and more. That’s where City vs City can help. Using curated local data, City vs City allows you to compare your living costs against another city of your choosing.

Check out the video below for an example:

If you’re thinking of moving, don’t make a move without downloading City vs City first!